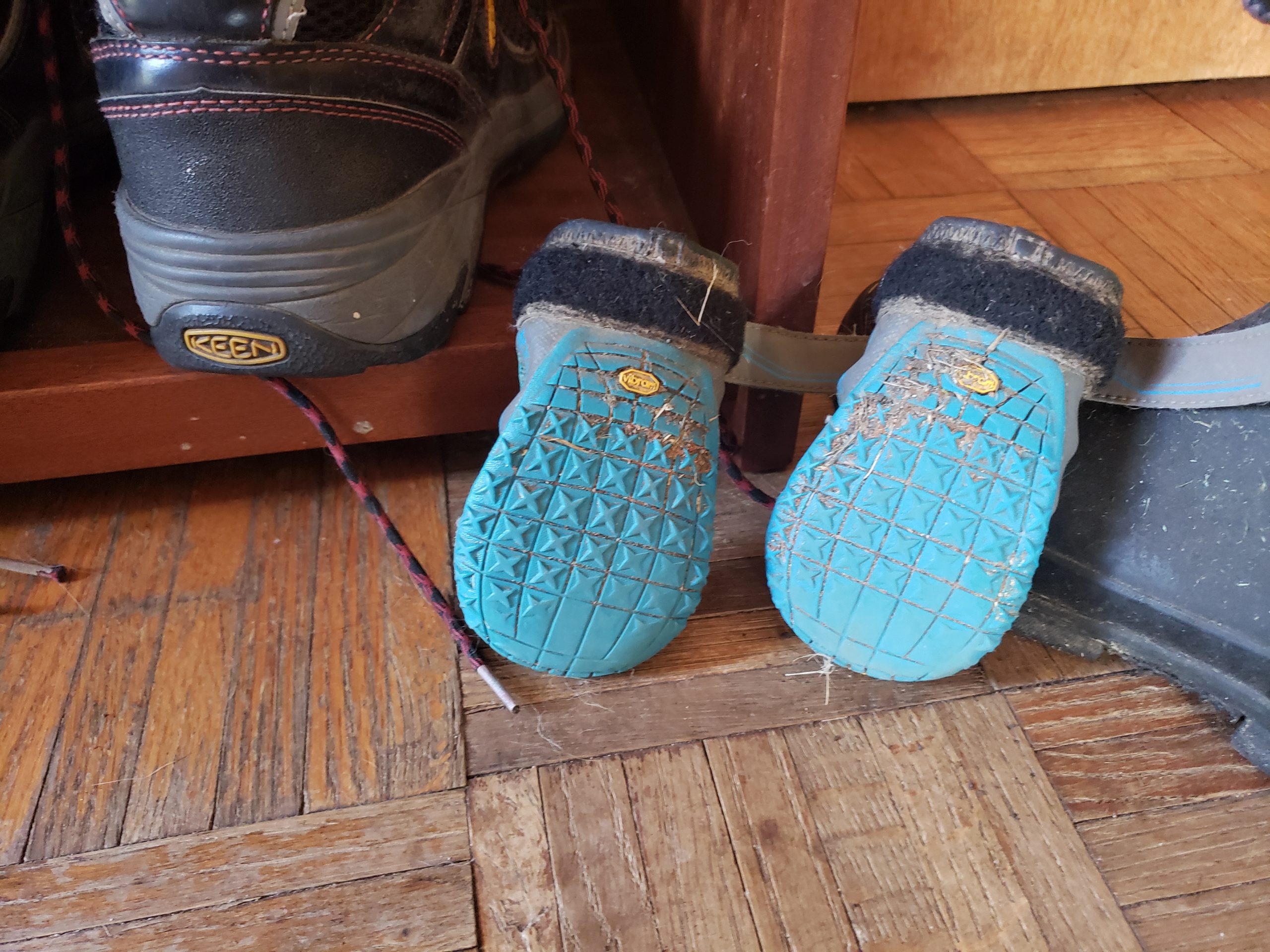 Every time I come inside the house, I’m expecting to see your smiling face from the dog bed. Though it’s actually been more like “sound asleep” face lately. Sometimes I even had to check if you were breathing. 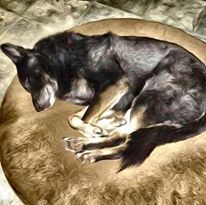 Huh? I was never sound asleep. I was resting my eyes. It’s hard work bossing all the birds around, not to mention the minions.

Speaking of that, I saw Talic chasing the robins the other day. It reminded me of you when you were young! Half the time I couldn’t tell if it was a robin or a coyote you were chasing out of the yard, you had the same bark for both.

I raised that young dog right. Just you wait.

I noticed. He’s taken up the “hair factory” job quite nicely. Everyone complains about long haired GSDs, but not only are they the most beautiful of the GSDs, they don’t shed half as much as you stock coats.

Something to remember me by?

That. I will be finding “Che hair” for years! 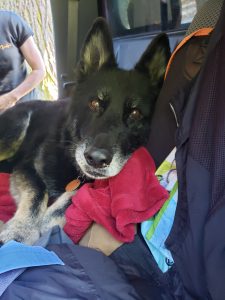 I did wash the belly bands and put them away in the drawer. No kidney issue dogs here any more. No hot flames dog bikini bottom to make jokes about! Remember when you peed on Dave and the whole bed? That was …. Startling…. And you almost died.

The 3 food bowls instead of 4 just gives me a twinge twice a day. The whole case of specialty canned dog food that costs so much, I can’t possibly feed it to the other dogs. The special herbs/powders that again were JUST FOR YOU.

Who’s going to clean up the “dog dishes”? Reiki and you were pro “cleaners”. Not a drop of gross raw stuff to be found after you guys were done with them. The twins… well, let’s just say that they have “challenges” in that department.

They are worthless at licking out containers. So picky. When I was young you starved us. I learned quick to eat anything. 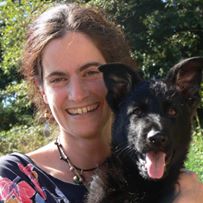 I DID NOT STARVE YOU. You came eating anything, talk about food drive. Pine cones, sticks, your own poop. I remember being in tears when you were a puppy. There are special locks on the trash cabinet left over from that time.

You forget to lock it sometimes. And I feast.

And then look like a balloon and throw up at 3 am. And then try to eat it again. I’m not going to miss that.

I eat whatever is put in front of me.

I know. It’s adorable. And useful for when we want the dog containers cleaned. Speaking of adorable, your mini “hot laps” around the table legs were absolutely hysterical. A far cry from the whole house laps you used to do when excited.

You have baby gates up. I think so the “Smushball” one can’t attack us?

Well, now the gates are up so you can’t attack him. He was trying to be so good the other day, and you were chest bumping him and yelling your old man bark. Who does that? Do you realize who he is?

I remember when he was a puppy and I kicked his ass. I could do it again too. He remembers.

I bet he does. He has always been very “respectful” of you. That’s code for “scared” of you. 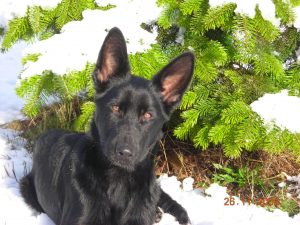 Good. That is how it should be. Respect and FEAR the old dogs. I rule the house, the yard and the minions.

I can’t get used to the new schedule now that you moved out. I don’t have to make sure you are empty first thing in the morning and after you eat. I sort of walk around wondering which dog to let out first, and catch myself looking around the yard for you, making sure you aren’t stuck.

I was not stuck. I was resting.

If you say so. Resting in a corner. Resting with your legs at that weird angle. 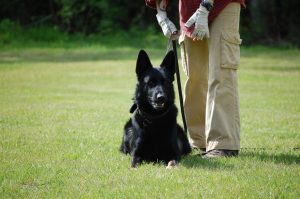 And we have no house dog when I leave! No one to guard the house!

Bayles can do that. She certainly is loud enough.

Yes. I guess Talic is grown up now, and she doesn’t have to keep him company in the kennel or the back yard. And Ones took on Loki’s job of Dave’s ride along work dog.

Good riddance. Now the rest of the house doesn’t have to deal with his looming presence and “big feelings” during the day.

Enough about Ones, I miss your adorable face. And you were so funny! So comical. In your old age, you were a joy to be around. Though I don’t miss the diarrhea in the house. Those last months, we were SUPER motivated to be careful what you ate. No duck for you! 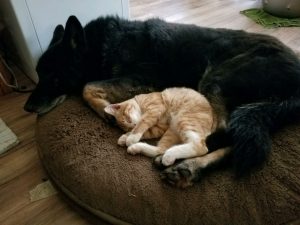 Whatever, I didn’t poop in the house as much as Reiki.

No, you did not. Luckily, no carpet in the whole house for years now. Though, then it is too slippery for old dogs and the yoga mats come out for traction.

They hose off well.

They do. Way better than whole mattresses. The whole neighborhood knows when there has been an “accident” since there are mats hanging over the fence. And the 2 close by houses also have 14 year old dogs, so we all nod our heads at each other in acknowledgement.

Yes, you did get here first. I had such dreams after Ender died so suddenly. We were going to go to Nationals! And get a UD!

You had a lot to learn. 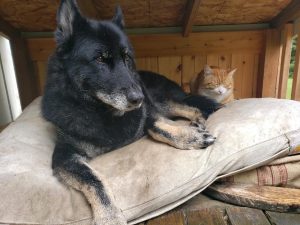 Boy did I. Crossover dog and all that. Paralyzed. Hmmnnn… I have no idea how to fix that without a pinch collar. And I did sort of give up a little.

And then the universe handed you Ones and you had to admit that it wasn’t me.

Yup. I had to stop labeling and start problem solving arousal in protection work. I’m still not sure I solved it, but I know a lot more about the subject in general now. Not to mention, how to gauge a dog’s mindset and ability to hear cues. You and Ones taught me much about “ready to work”.

Any special requests now that you’ve moved out?

I wanted to be buried right next to the gate and walkway. Right in the way.

Can you settle for a trellis or something that I have to step around near the gateway?  I’ll remember “Che in the way” every time I step around it.

With birds on it? That way they know not to land in the yard since I’m still here. They can have the fences, and posts, but not the grass.

Yes, I can find a trellis with birds in the design. Good bye Che.

I STILL RULE THE HOUSE.

14 years. That’s a long time to know someone.