Shade offers workshops and seminars across the U.S.

“Currently, I would consider myself a clicker trainer. What that means to me is that behavior is dog’s choice, and it’s up to me to control the access to reinforcement and to teach and motivate the dog so that he chooses what I want.”

Shade has been training and competing in dog sports since she was a kid. She has always been interested in how dogs learn (she has run a successful dog training business since 1994) and has competed in IPO/Schutzhund, AKC obedience, and French Ring.

Her retired dog, Reiki vom Aegis, IPO 3, FH 1, French Ring 1, CDX, was 5th at the 2010 AWDF Championships, 7th at the 2012 AWDF Championships, 1st at the 2011 Northwest Regionals, and 2nd at the 2012 Dutch Shepherd Nationals. Reiki is now almost 11, and Shade is currently competing with his son, Ones. Ones just earned his IPO 2 with scores of 99 in tracking, 95 in obedience and 96 in protection. He looks likely to follow in his dad’s footsteps! 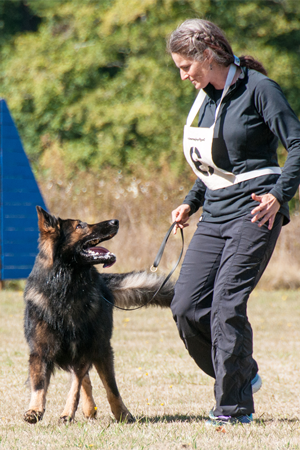 Teaching these 2 what to do when around each other

My favorite picture of Dave and Ones! #gsd #GoodDo

Bringing the toy back for more tugging! This was a

Pleased to be presenting at this conference along

Always like to see this in my puppies! Tracking wh

Talic and I really needed some one on one time out

CONTEST! Free bronze spot in Cutting out the cooki